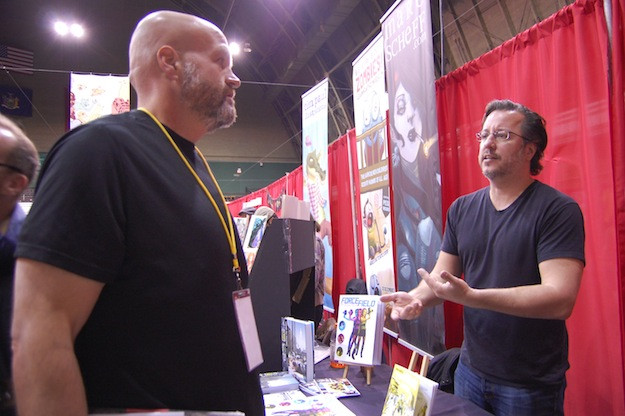 We met 23-years ago in Chicago at my first Comicon where I debuted Keyhole #1 (with Josh Neufeld) in 1996. We kept in contact on a regular basis ever since.

When Cav texted me "I think Tom Spurgeon died" I didn't want to except that as fact. I immediately called Cav and we talked briefly about the validity of the terrible news and I hoped it was false. But, what gave the bad news some credence was my last interaction with Tom Spurgeon a little less than a month ago when I saw him at Baltimore Comicon. I was surprised and thrilled to see Tom. It had been a good long while. Possibly six years since the eye-opening interview he did with me for The Comics Reporter in 2013 ( http://www.comicsreporter.com/index.php/resources/interviews/41821/ ). So, when I saw him, I gave the big guy a big hug.

The next night I saw Tom at The Ringo Awards when he walked up on stage a couple of times to accept some awards and complained, half-jokingly, that walking up three steps winded him. He was afraid of having a heart attack. I wanted to laugh WITH Tom but it was apparent that he was struggling. When I saw Tom after the award ceremony, he was sitting in a chair. I don't normally express concern for a person's health, especially someone as overweight as Tom could be, but it didn't matter. I was genuinely concerned and asked, "Are you okay, Tom?" He said he was okay, "fighting the flu" or a cold, and I just wanted him to know that I cared. Tom appreciated the "good looking out" and we discussed me coming to CXC and a few other things before I was taken hostage by Jim Steranko and stories of magic and thievery.

Comix was robbed today. I can't imagine a comix industry without Tom Spurgeon. He spoke and wrote about every aspect of comix in an intelligent, insightful, and passionate way, even if it meant sparking spirited debate. Tom was an advocate of the form but he also knew how to push buttons and we had our share of differences. As did most everyone who knew and loved Tom.

He was 50. We lost a beautiful giant.

ADDENDUM: Here is a link to what I said at the Tom Spurgeon memorial at The Society of Illustrators on January 24, 2020: https://man-size.livejournal.com/886408.html
Collapse