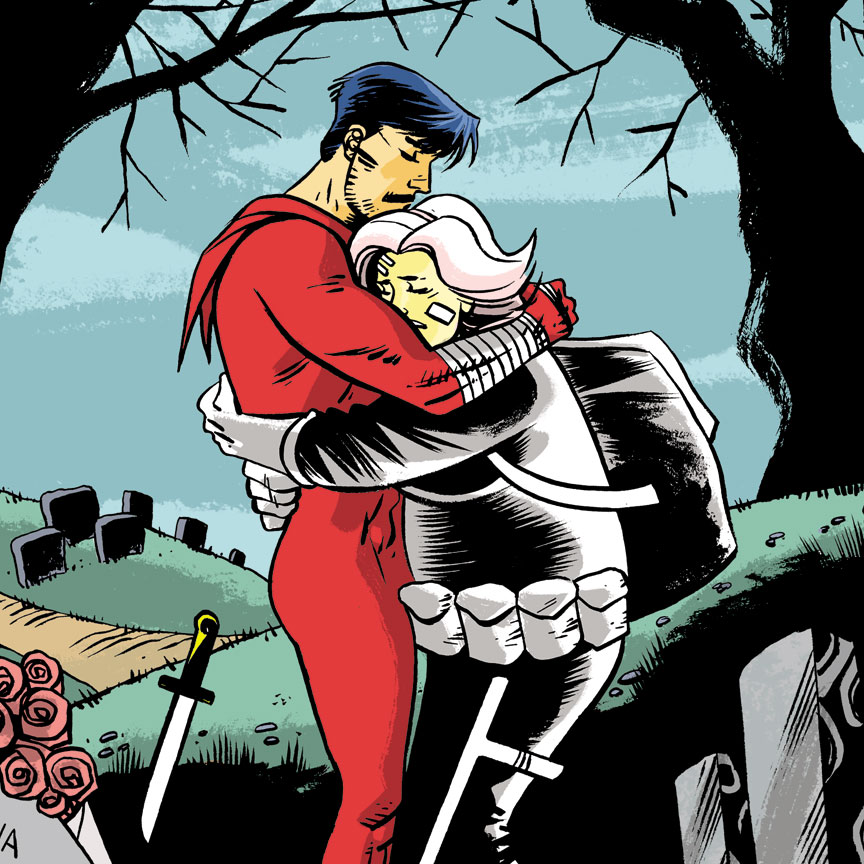 "STARCROSS is an epic for a post-solitary century; the kind of quest defined not by what prize you bring back, but by what precious values you leave the world."
--Adam McGovern, HiLoBrow

Gracious thanks to Adam McGovern for writing such a beautiful review of my webcomic, STARCROSS (The Red Hook season 3, which you can binge read starting with chapter 1: https://www.webtoons.com/en/super-hero/star-cross/episode-1/viewer?title_no=1599&episode_no=1 )

Here is the review:

"We try to climb the sky, but it falls past us faster. It’s as if the friezes and tapestries of ancient epic have been turned on their side, the vertical roll of the electronic screen pouring living memory and human effort to the bottom. The stories in our hands progress as our fingers climb down them; to go forward we must dive deeper. Dean Haspiel’s online comic STARCROSS plummets Icarus-like from the firmament for its morality and meaning to rise to Earth.

The third series in Haspiel’s The Red Hook cycle (itself one branch of the “New Brooklyn” stories which also include Vito Delsante & Ricardo Venancio’s The Purple Heart also on Webtoons and, full disclosure, my own Aquaria with Paolo Leandri and Dom Regan in print at Image), STARCROSS crowns the narrative from a teetering beanstalk. It began with the titular hero, a palooka turned costumed burglar, hewing close to the cracking pavement of his native Brooklyn — at least until the anomaly of the borough’s tectonic “secession” from its adjacent New York landscape unleashes celestial forces that push him into a life of good deed-ing. The Red Hook wrestles with his base (and humble) instincts of self-interest and a higher calling bequeathed by a cosmic hero who happens to die in his path and affect a kind of angelic possession. Long story, but the tension between Red Hook’s street scale and the grandeur of his mission has always been a tug of war between the mortal and divine, the pedestrian and quantum.

In his first series the ground held him (and his lover and crime-partner The Possum ended up under it); in the second War Cry, the sky collapsed on them both as she was resurrected in the form of a planetary protector by secret doomsday-failsafe protocols (longer story); in STARCROSS the horizon and the material world reunite after an ordeal that takes our heroes to heaven and back.

Common causes are the staples that bind Haspiel’s universe, and those who go it alone stay that way and end up nowhere. Epic pairs are the nucleus of his work, from the sex god and goddess Billy Dogma and Jane Legit to The Red Hook (Sam) and War Cry (Ava) here; the more circles of humanity that radiate out from these unions, the more gets done. When Jane and Billy’s balance is stormy, the world shakes and whole communities take to the streets and take matters (or each other) into their own hands to restore harmony; in STARCROSS the sun is going out from human coldness and Sam & Ava must figuratively and literally reignite it. Along the way they must cross dimensions, argue with uncaring gods, and share profound sacrifices; Haspiel understands that the most superlative stakes are those that affect each person, and the scale of his monumental menace is measured by the intimacy of his focus.

STARCROSS is an epic for a post-solitary century; the kind of quest defined not by what prize you bring back, but by what precious values you leave the world."