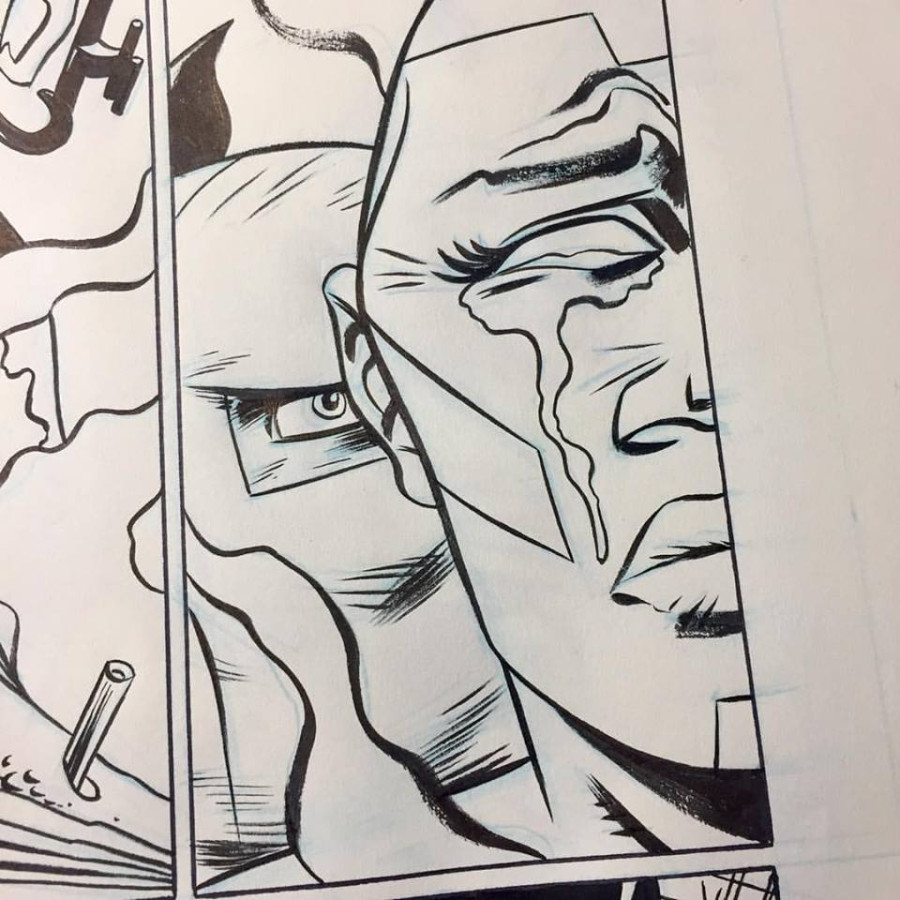 "It is something I learned doing a weekly webcomic when I did Billy Dogma at ACT-I-VATE years ago. The trick that I used there is that I didn’t know what was going to happen next week. It kept it loose yet exciting, but I had to figure out what the hell was going to happen. I found out years later that it’s a trick that Mark Waid uses. He kind of writes himself into a corner, and then tries to figure it out in the next issue. This way the reader and the writer feel this same kind of menace from the cliffhanger."

"When I think about my future in comics, I realize that I am not a “Wednesday Warrior” kind of guy. I’ve done it. I did two five-issue mini-series of The Fox for Archie Comics. Those are examples of monthly comic series that I have done, but usually what I do are graphic novels or webcomics.

I have hopscotched all over the place, but I don’t have four years of a monthly title under my belt, and at this age, frankly, it’s not going to happen. There is no way I could produce something like that even if I was just the penciler. Coming up with twenty-two to twenty-four pages of comics in, what, five weeks? There is no way. Even though I have done a ton of comics and I have a reduced silver-age indie style, there’s no way I could do that.

What I have been thinking about in terms of the future of comics that I produce is the forty-eight- or sixty-four-page graphic novella."

"Thanks God, right now, I am in this really cool autonomous space. For the last three years, I have been creating comics that I own and that I get paid for, which is insane. I am like, “How did that happen?” I thank Tom Akel, my former editor at Line Webtoon, for believing in me, and pushing for me to do the kind of stuff that I do. Not a lot of people would take a risk on me like that. I am not the hotshot writer or artist. I have a peculiar sensibility."

"What I was playing with is my love for Shazam. Billy Batson shouts the word “Shazam” and becomes this adult superhero god. It is also kind of like Firestorm where it is two personas becoming one as a superhero. It also plays with the idea of Hawk and Dove where there is a peaceful person that shares a body with an entity that is ready to throw down and fight at any moment. There is also some element of OMAC who is blasted from the robot Eye in the Sky that turns him into a modern-day Ares. So, it is kind of a mashup of all the things that I love put together into War Cry, which is this duality between a young boy and a resurrected super-thief.

It, also, becomes kind of like a love story. A lot of my stories are surrounded by romance, because the key to any good story is romance. Actually, in StarCross, it is about how love will save the world, which is corny and sentimental, but hell, I’d rather put my energy into something that is a positive message than something negative."

"It’s my “Hail Mary” to being a born and bred native New Yorker who can no longer afford live in the home and place that he grew up, where art is increasingly more difficult to sell. We have Patreon and we have Kickstarters, all these social network tools to parade, celebrate, hype, and brand ourselves. It becomes more synonymous with free content as opposed to something that you’re willing to pay for. It is getting harder and harder to make a living.

Thankfully, right now, my work is underwritten by a South Korean publisher online. I have gone out of country to make a living. But luckily, I have a relationship with Image Comics who is taking a risk on publishing the print version. That starts another conversation in that it is already online for free.

Why would people need to buy it? As you are witnessing by looking at the book, it is a different experience. Also, I prefer to read books in my hand versus reading online. After a while, your eyes get tired, and your attention is just stolen all day long by anything and everything that is happening on your phone or the internet. How do you sit and truly indulge anything substantial? New Brooklyn to me is a wish, in a lot of ways. Ironically, we hear people talking about going green and being socialist. It is in a way a socialist fantasy.

I don’t know if that would actually work, but it creates a discussion. Not only for the reader, but for me as well. I am only dipping my toe in New Brooklyn. I am not trying to explain it, because again, I am not that smart. I do have complicated feelings, though, and a lot of my writing comes from an emotional response to what is happening."

"I think I once said that the questions are more important than the answers. So, Sam, the lead of the story, is going to be asking a lot of questions when weird stuff is happening. What do you do with that? How does it impact your life? He is trying to navigate through all of this, because he is a blue-collar kind of guy. Not that I am blue collar, but I respect blue collar thought."

"One shouldn’t say that their mom is the best friend, but my mother is one of my best friends. But she is also my mom. She is my hero. She comes from Michigan. She came to New York and started off as a secretary at the New York State Council of the Arts and became Deputy Director. She went on to own and Antique Store in the Catskills, and became a volunteer firefighter in Florida. She has gotten into politics to try to get Florida to be a little bluer. Earlier, you were saying that you recognized Sam Brosia as being my voice, but in a lot of ways it’s my mother’s voice."