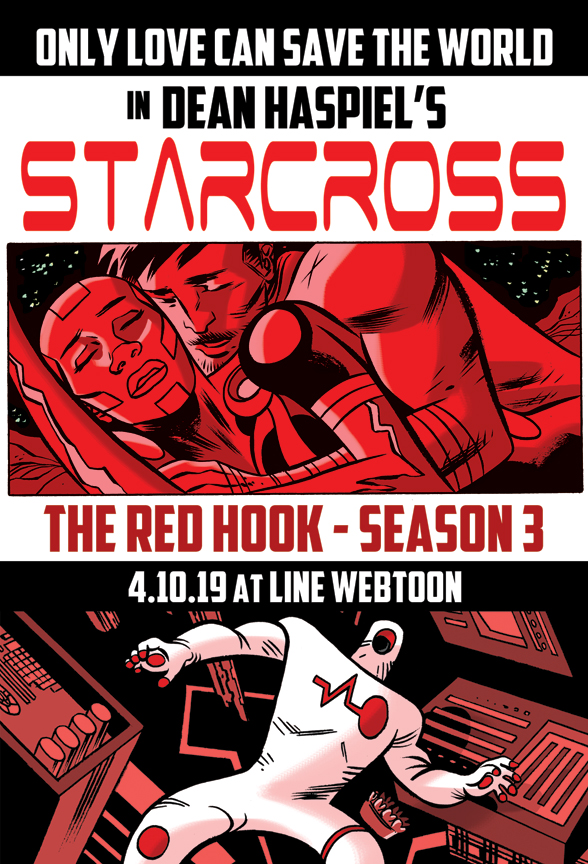 Hannah Means-Shannon conducted an interview with me about my new webcomic series, STARCROSS, The Red Hook season 3 (for LINE Webtoon) at Comicon.com

"The cosmic aspects of my comix are definitely influenced by Jack Kirby’s Negative Zone in The Fantastic Four, coupled with Steve Ditko’s psychedelic astral planes in Dr. Strange. The Monolith in Stanley Kubrick’s 2001: A Space Odyssey carries profound curiosity in my mind. The outer space jockey and gardeners from the “Alien” franchise has been rattling around in my head for awhile. And, recent cinema like Moon, Interstellar, Arrival, and Annihilation hit me hard emotionally."

"Some artists convey flight with balletic verve, as if the body is made of feathers. I prefer to display mass and how flight can disorient you; how a body combats the tether of gravity.

Years ago, I remember studying Curt Swan’s Superman and admired how he drew the man of steel as if he weighed 400 pounds of relaxed muscle. Which makes sense since Superman’s extraordinary powers are activated by the earth’s sun, and gravity is an important part of what makes his abilities work. I always admired how grounded (literally) Curt Swan drew Superman lifting off and flying as if he needed to take a running start. Former Justice League of America artist, Mike Sekowsky, drew his heroes like inebriated meat sacks that stumble and flounce rather than leap and bound. Most recently, Lee Weeks illustrated gravity like a boss in that great Wile E. Coyote and Road Runner inspired chase sequence in Batman #67.

Another artist I’ve leaned on for a graphic sense of gravity is John Romita Jr. It’s as if he ate everything Jack Kirby, Frank Miller, and his father, John Romita Sr. drew, and combined their catalog into drawing the modern superhero. I’ve learned a lot from Romita Jr’s Spider-man, Thor, and Iron Man comics. His characters always feel centered."

"I can’t color to save my life. And, because I have poor Photoshop skills, I hardly render in color. In fact, I designed a limited color palette for The Red Hook season one only to be told by editorial that I had to expand my color schema. I think they thought more fans would read my comix if I made the sky blue and the grass green. I disagreed, but the challenge made me confront some creative fears. And, I leaned towards the bold Stan Goldberg colors of 1960s Marvel, and Adrienne Roy’s team book colors in those 1980s New Teen Titans and Batman and The Outsiders comics published by DC. I discovered new ways to color code scenes and characters for narrative clarity and emotional impact."

"Remove New Brooklyn and take away the superhero tropes, and the core is a classic story about The Red Hook’s love for his girlfriend, Ava Blume. She is his center. His inspiration to do better. Be better. Anyone who has ever been in a serious relationship can relate to this. And, what happens when the person you’ve devoted your heart to dies trying to save your life, resurrects into a human of mass destruction and then, ironically, becomes the only solution that can save earth from extinction?"

"I’m still using cheap sketch paper, blue pencils, a Japanese brush pen and Jet pens for inks. I digitally color, letter, and edit my art into a vertical scroll, while keeping in mind the eventual print version. I lay out the comics I produce for LINE Webtoons differently than most other comics I create. It’s been quite a challenge. I’m still discovering a better, more succinct shorthand in my work. I’ve always maintained that my art is story-driven. Don’t waste your time ogling my illustrations. There’s nothing to see here. Just read it, enjoy it, and move on."

"And, then there’s the Instagram comics model. One to ten square panels of comics. Same thing I did at ACT-I-VATE, the now defunct webcomics collective I founded 13-years ago at Live Journal in 2006. I realized that most of my more successful creator-owned comix launched online and I’m thinking of starting a Patreon for my next self-produced comix project. See, I’ve grown weary of creating and curating content for Facebook. I know social media has become a groundbreaking (yet questionable) part of our daily lives, but why not see if I can make a few bucks doing the same thing but with new work and make my digital footprint more intimate and qualified?"

"Curiously, writing plays has started to affect the way I think about comic books. Even though the blank page has an unlimited budget, I’ve started to treat my comix like black box theater. I’m writing my scenes as if they could be performed on the stage. I never have more than 5-6 major characters in a story. I simplify the setting. I try to keep each conflict between 2-3 characters. By shrinking my cast and settings, I’m able to better develop my story and achieve themes. It’s been an interesting phase in my comix process."