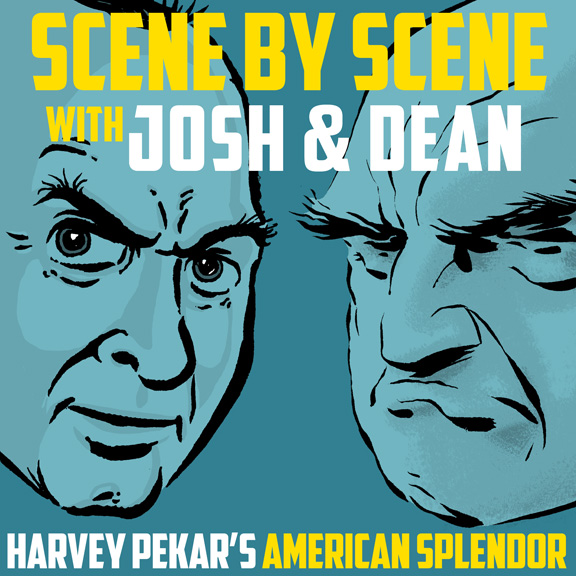 Hannah Means-Shannon interviewed Josh Neufeld and I about our new podcast, SCENE BY SCENE WITH JOSH & DEAN, about Harvey Pekar and American Splendor the movie.

Here are some excerpts:

"When Josh first approached me about doing this podcast I was hesitant. As much as I love collaborating with Josh, and cherish Harvey Pekar, his comics and the movie, I didn’t think I could devote the time and intelligence necessary to breaking down the movie minute-by-minute. That’s right, when Josh first pitched it to me he wanted to dissect American Splendor minute… by… minute. Josh tried to sell me on the Star Wars Minute format — but I had to remind him that epic sagas strung together with yarns of lore and reams of fan fiction can explore each minute of a film second-by-second, but I didn’t feel American Splendor had that kind of latitude. Which is why I suggested we break it down scene-by-scene. And, when Josh finally agreed to that, I still wasn’t convinced to do it.

Even though I studied film at SUNY Purchase, watch movies weekly, and I’ve written unproduced screenplays, I had reservations about spending that many hours analyzing and critiquing a single movie that intensely. I know Josh wanted to also discuss the original comics that served as source material and influenced the film but, again, did I really want to steep that deep into the legacy of Harvey Pekar?

I will never take for granted the fact that collaborating with Harvey Pekar on The Quitter put me on the comic book map. I am forever grateful. But a part of me feels like I need to let the past stay in the past and respectfully move forward. It’s emotionally difficult for me to revisit the past. Especially those people who were so important to me in my life. I grew up with a father who has devoted most of his life to a person who died almost sixty years ago. I suppose my initial hesitations in co-producing the podcast stemmed from an allergic reaction to my father’s loyalty to the past.

Ultimately, Josh and I discussed the merits of this unique project and agreed to use the movie as a way to also talk about our relationship with Harvey, our comix careers, the industry and, most importantly our friendship. And now that we’ve produced more than half the season, I’m happy Josh asked me to do it." 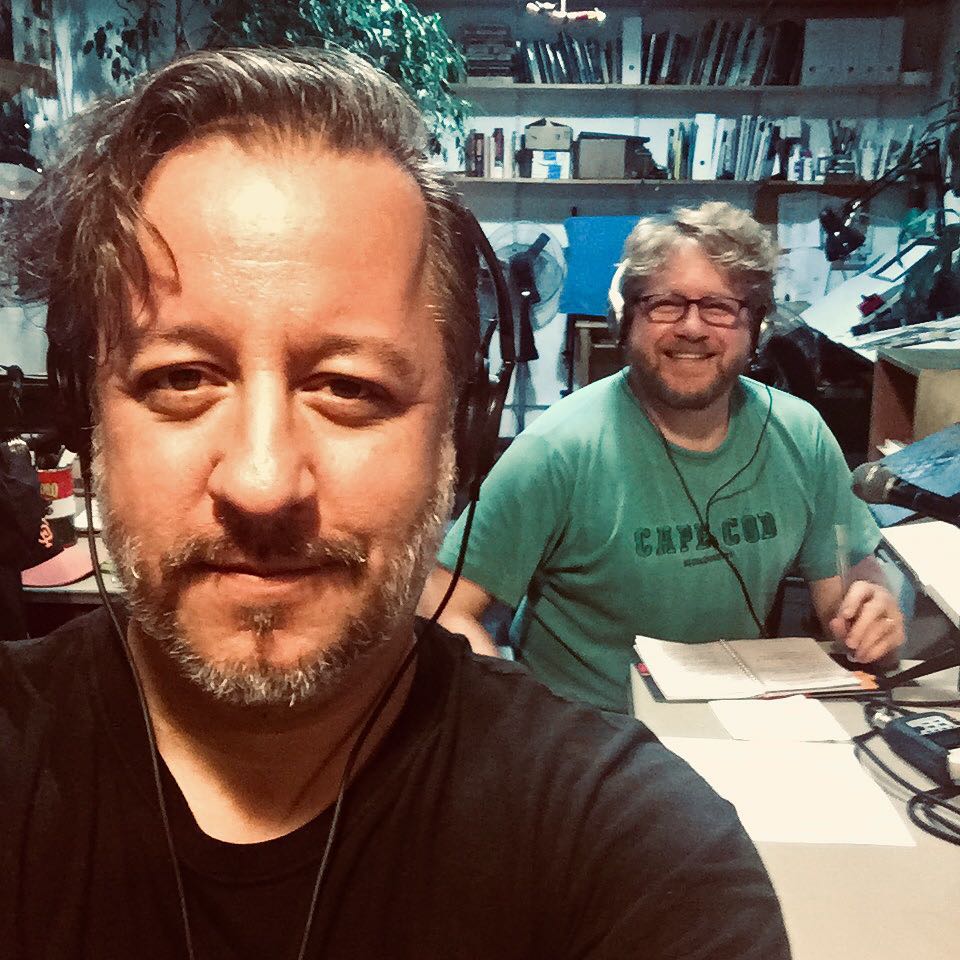 "Fans of cinematic and comix detail and personal stories are going to freak out over this podcast. Josh did a great job researching the minutia of the film, the comics, and most everything that went into shaping the movie. He plied me with photocopies of the comics, a spreadsheet breaking down talking points for each episode, and cut up the movie scene by scene. A podcast of this magnitude is as prepared and professional as can be. No room for boring navel-gazing.

However, with all the preparation, I felt it was important to improvise. Incite a sense of conversational discovery. Encourage our analysis to derail a little bit into other, interesting territories. Luckily, the movie is rich and serves as a vessel for spirited dialogue that both educates and entertains."

"Place a magnifying glass upon any author’s oeuvre and you can’t help but find curious connections between their work and yours. After Harvey’s sudden death, I realized that his work gave me the gift of observation. Harvey’s ear was as profound, if not more than his voice. He listened. Having that distance between reading Harvey’s work, drawing his stories, and writing my own allowed me to identify important ways to tell a story — especially memoir. And even though Harvey wasn’t a guy who dug superheroes, emulating his nuanced approach helped humanize and make more complex my flawed characters."

"Having been involved in the film, it’s been fascinating to revisit it so closely and make connections I hadn’t noticed before. Stuff you’ll have to find out about while listening to the podcast. But the fact that the movie still holds up, is still ahead of its time while paradoxically being classic, is admirable and awesome. I encourage anyone who hasn’t seen American Splendor the movie to watch it before listening to our podcast because it will only add more value to the discussion."

"Harvey suffered no fools, but even though he was a famous curmudgeon he also had a heart of gold and was a good guy. The movie does a great job negotiating Harvey’s complexity. And, as amazing as the actors were, the movie proves how beautifully avant-garde it is by letting the actors share screen time with the real-life people they are portraying, almost as if your mind was playing tricks on you, contrasting memoir with fiction — and it’s wonderful." 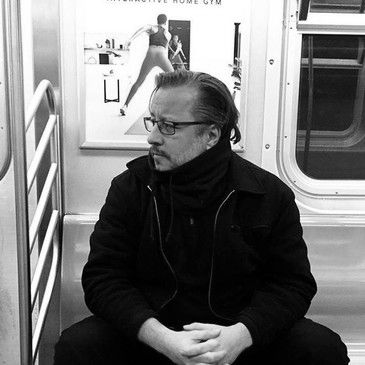 "I think almost any adult in America can watch the movie cold, knowing nothing about Harvey Pekar and his legacy, and they’ll walk away wanting to know more. Not because the film doesn’t do a brilliant job telling a feature length version of Harvey’s life, but because the filmmakers do a fascinating job taking an otherwise ordinary, blue-collar guy with a hankering for jazz, comic books, and junk food, who makes friends with misfits who carve their own niche to communicate and connect with people, and wrap it all up under the guise of a romantic comedy! If you can’t relate to that, I can’t relate to you."

"Harvey Pekar transcended comic books with his commitment to memoir when it wasn’t fashionable. When comic books weren’t cool. Coupling words and pictures that could do anything; say anything, Harvey was blogging about his life in comic book terms before social media and the 24-hour news cycle took society hostage and inoculated us with attention deficit disorder. Back when a “selfie” came with a story. In American Splendor, no topic was off limits. Even though Harvey was the hero in his story, he wasn’t heroic. That wasn’t the point. The point was to communicate, captivate, and connect with real people. Harvey was just an honest and authentic guy."

And, you can listen to the SCENE BY SCENE WITH JOSH & DEAN podcast here: http://scenebyscenepodcast.com/ 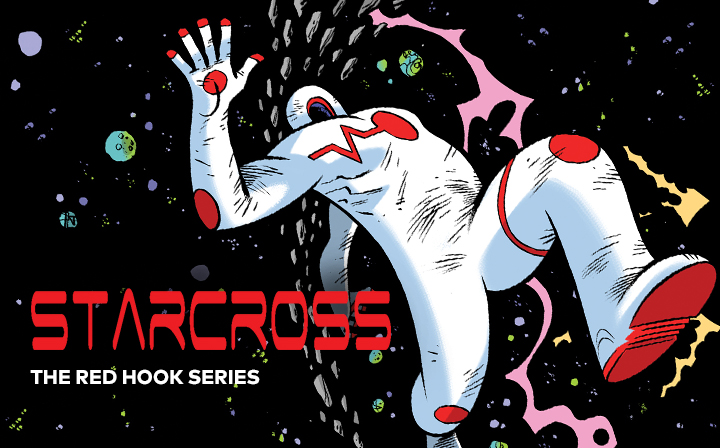 STARCROSS finds New Brooklyn on the eve of an ice age that will make all life on earth extinct. The only way to save the planet is for The Red Hook to ally with Sun Dog, find and rekindle romance with War Cry, confront the Omni-Gods, and give birth to a new dawn where only love can save the world!

You can read the first three chapters here: https://www.webtoons.com/en/super-hero/star-cross/list?title_no=1599

"STARCROSS is the cosmic conclusion of a romance featuring the life, death and resurrection of War Cry and her lover, former thief/superhero, The Red Hook in New Brooklyn. Metaphorical themes of secession, unrequited love, and global warming make this season a must-read for all fans of the modern antihero."

Please know it's best to view STARCROSS on your smart phone and/or tablet.