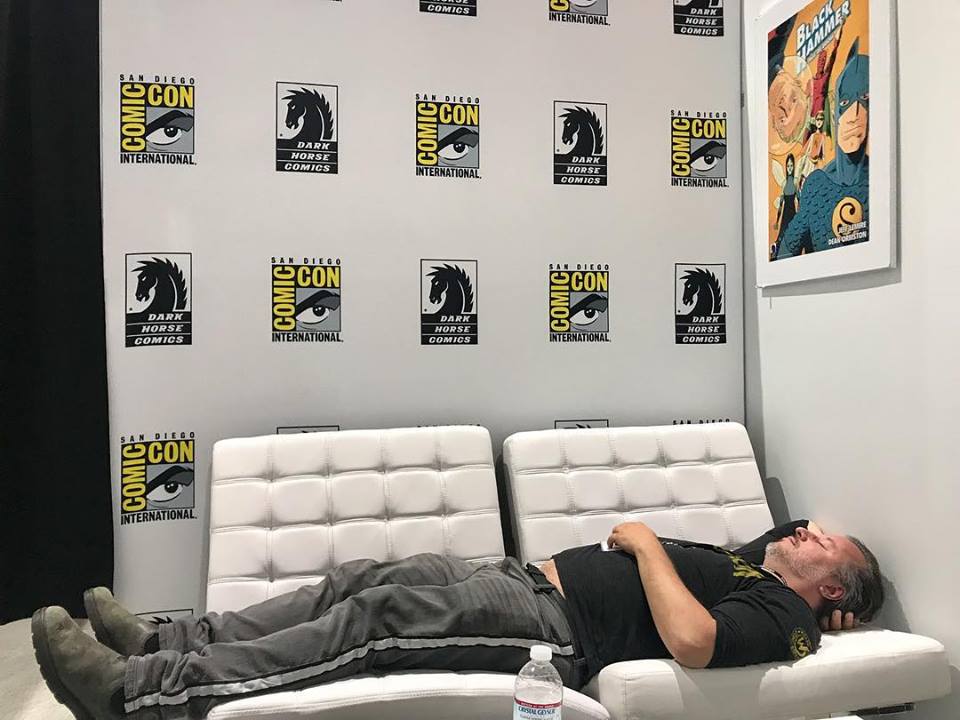 Hannah Means-Shannon interviewed me at San Diego Comicon 2018 about the 10th anniversary edition of THE ALCOHOLIC, published by Berger Books (an imprint of Dark Horse Comics) for Comicon.com

"I had wanted to work with Jonathan Ames since the moment I met him. I was a fan of his writing. It turned out that we lived in the same neighborhood at the time. I went right up to him, and one of the first things I said to him was, “We’re going to work together”. It turned out to be a good thing that he had read comics. You never know with literary people, since some shun comics. Ames was an old fan of The Avengers, and Nova.

Comics were never taken seriously when I was growing up. They were mocked. In general, comics were seen as power fantasies for 12 year old boys. Then there were books like Art Spiegleman’s Maus, and other underground comix, but those were more focused on the holocaust, or drug culture. Harvey Pekar writing memoirs, and being able to write about anything, really broke the idea of what comics could be. Even though the history of comics had originally included other genres like Westerns, War, Romance and Crime. But I think that what comics did especially well were superheroes because of the unlimited budget of the blank page. But little by small, TV and movies have caught up via technology and the ability to visually convey what comics could do best."

"I’d read a bunch of his essays in NY Press. I thought he was very funny, and what was interesting about his essays, when I thought about it later, is that he was usually the loser in the story. And the way that he attracted you and made you care for him was by being vulnerable. When meeting him, he kind of did that, and I realized that’s who he was.

I was surprised, because you never know if it’s a character. Maybe it’s a little bit of a character, just like I have a public face. In this case, he never wanted to hurt other people in his stories, so he would take the brunt of it. He once described himself as “a clown with cancer”.

"He’s definitely empathetic. Ames didn’t want to hurt people, and he didn’t want to judge people in his stories. So, he would meet all kinds of misfits and maybe he was kind of like the straight man, who would enter a situation, and events would unfold. But if anybody got hurt, it was usually him. It wasn’t like he would go on an adventure to get hurt. I don’t think he was masochistic. But when you make yourself available to weird situations, there’s a good chance that you will come out of things a little damaged."

"My pal/cartoonist, Bob Fingerman was the person who revived Jonathan Ames’s work for me. Fingerman had bought his first essay collection, What’s Not To Love?, and he would read some of the stories over the phone to me, and we would be dying laughing. Bedtime stories narrated by Bob Fingerman by way of Jonathan Ames."

"Then you meet your heroes, and you collaborate with them, and it becomes more expansive. In a very different way, I’ve gotten into Doug Stanhope, the comedian, and I went to see his standup recently. A soothsayer for the 21st Century. I gravitate towards these outliers like Harvey Pekar, Howard Chaykin, Frank Miller, and hell, even Steve Ditko and Jack Kirby."

"People worry about their work, wondering if other people will think it’s weird. Will people like it? That doesn’t matter. Make something you care about, and make it authentic. I think what we’re seeing now, in our culture, is that it is good to put yourself out there, and be honest and authentic about it. It’s not about winning awards, but it is about being acknowledged for your work, whether that’s in sales, people talking about it, someone wanting to option it for other media, whatever. The point is that it starts with you and a blank page, asking “What is it I want to do? What do I need to say?” If you can invest in yourself, maybe others will invest in you, too."

"One of the comics we gave to Jonathan to update him, since he hadn’t read comics since he was younger, was Y: The Last Man by Brian K. Vaughan and Pia Guerra. He was so entertained by the cliffhanger aspect of that, he loved it. So, Ames was thinking, “Maybe this issue could end with him on a fire escape, and he doesn’t know where his pants are. Is he going to find his pants?”