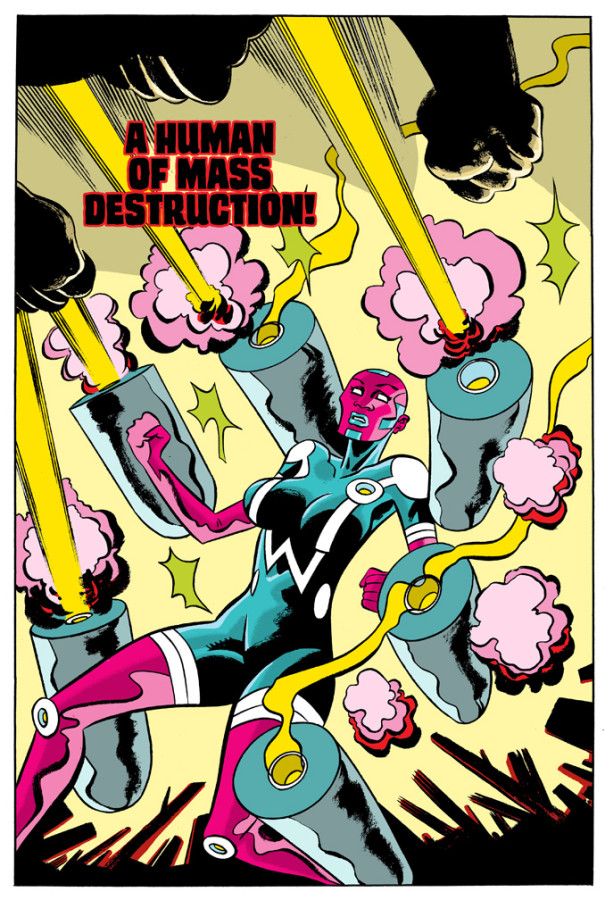 I'm thrilled that WAR CRY, my sequel to The Red Hook, was nominated for a Ringo Award for 'Best Webcomic' 2018.

Geek.com's Tres Dean wrote an article about an Image Comics panel I was on discussing genre in comic books at Book Expo America 2018.

"After some brief introductions, Alverson got the conversation underway by observing that each creator had described their work as falling within the realm of different genres, be it queer romance or superhero. Haspiel countered, suggesting that superheroes encompass many genres, be it crime or speculative fiction. He argued that fights and superpowers aren’t what dictate the genre, which Soule quickly pointed out very much is a genre in and of itself. Those kinds of stories do exist, and should."

"This led to a discussion about art influencing the perception of genre. Haspiel recalled drawing a Harvey Pekar graphic novel and being called out for his style looking too “superhero”-esque."

"Haspiel touched on that, discussing how years and years of early superhero comics dictated the perceived genre of superhero comics and that this is present in any genre and in any art form. It takes, as Haspiel suggested, something bold like the Run-DMC/Aerosmith collaboration to blur the lines and shift perceptions. “We have that latitude now,” he stated."

"As the conversation progressed, Haspiel said that he feels genre is something of a promise to a reader, comparing it to a Chekhov’s Gun equivalent: if you introduce a gun in a scene, it has to go off. Similarly, if your story is marketed as a horror story or a superhero comic, there are certain things that you are promising that have to happen."

"Of the panelists, Haspiel’s work most frequently defies or blends genre. Haspiel talked about effectively playing DJ, mixing and matching bits and pieces of genres he likes in his work, creating something unique to his perspective out of those smaller parts. He said he tends to shirk from the straightforward genre, citing an offer years ago to pitch Hulk: Noir for Marvel and coming up short. Later though, when given more freedom with genre, he came up with the Wood God story for Marvel’s Strange Tales."

"Haspiel brought up an earlier comment by Alverson, who said that she doesn’t care for science fiction, and suggested that the film Arrival is a great example of one that defies its roots in sci-fi and becomes something greater."

Alexis Sottile interviewed me about my graphic novel, THE RED HOOK, for The Village Voice.

Sottile wote: "The Red Hook is an ode to Brooklyn wrapped in a Dear John letter (wrapped in an “I love you anyway” letter), and inked in more bright and muddy hues than the water of the Gowanus Canal."

Here are some excerpts from the interview:

"I grew up reading Marvel and DC comics and then later on specifically a lot of Jack Kirby–inspired comics and/or written and drawn by Jack Kirby, Steve Ditko, Stan Lee, later on Frank Miller, Jim Starlin…and what I discovered is that a lot of those comics that were made back then were very prescient. And you could say the same thing about Star Trek or any kind of science-fiction or fantasy material, where if you put ideas out there, they start to materialize. Like our phones. We went from dial phones to, like, a flip phone from Star Trek. Anyway, all of these comics would impart these future ideas, which, little by small, start to come true."

"So, [years ago] I’m sitting in a studio in Gowanus, Brooklyn, sharing a space with six other artists because we can’t afford individual studios anymore, and then those studios start to become too expensive. And buildings are getting bought and sold to the highest bidder, who then sit on a space and do nothing with it, because they’re waiting for the developers to turn the neighborhoods into Gardens of Earthly Delight — I mean, the Gowanus Canal in my lifetime is never going to be a place to swim in. Why would you want to do that? — but that’s the kind of thing they’re trying to do. The building the studio was in two years ago, which then got bought and sold, is still sitting there, they tore down all the walls, and I saw some plans, where underneath the Smith and 9th Street station they were trying to show a huge patio garden where they’re serving food and beer while the F and G trains run over you. On the one hand, it’s a fun idea, but realistically, it doesn’t work. They [builders] buy these 99-year leases, and sit on them for 10 years, and kick out all the artists. It’s too expensive. New York City is no longer underwriting the avant-garde, or interested in performance spaces. They’d rather build another bank or another pharmaceutical grocery store."

"I didn’t worry too much about the nuts and bolts of what would happen, except, when you pull the bridge apart, it snaps in half, a bunch of subway systems will flood…but what kind of beauty will rise from it? And you know, I love superhero comics, so I thought, there’ll be superheroes and supervillains, I’ll get to have fun with those tropes. But at the same time, I myself want to be able to trade or sell or barter my artwork that I do as actual commerce. I remember going to the dentist, and I couldn’t afford the root canal. And I discovered that the dentist was a comic book fan, and I basically got commissioned to draw him as a superhero in trade for a root canal."

You can read the entire article/interview here: https://www.villagevoice.com/2018/06/29/pow-the-red-hook-takes-new-brooklyn/
Collapse