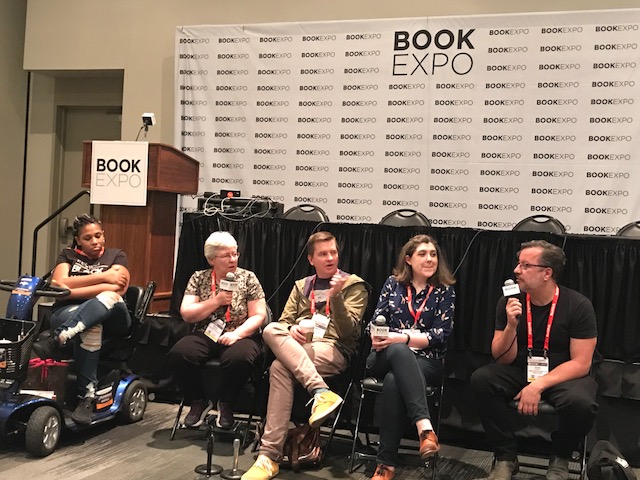 "Each of the panelists used genre terms when introducing their works, Alverson noted, and asked them to comment more on that usage.

Haspiel was known as a superhero creator, but he commented on the inclusion of action, sci-fi, and even romance, in such works. He commented on Guardians of the Galaxy being about a group of misfits who become friends, and later family. But there’s romance and other elements, too."

"Haspiel said that when he was drawing, The Quitter, a story with Harvey Pekar, some fans complained that the artwork looked to “superhero-y”, even though there was no aspect of that in the story. They were expecting more of an R. Crumb approach. Haspiel said it may be down to the “limitations of our brains” in coming in with certain expectations for certain types of art style."

"Haspiel has worked a lot in black and white and a lot in limited palette, he added, agreeing about the impact of color. He feels that black and white and limited palettes are harder to sell to readers these days since they seem to feel they are getting “less of a book”, but look at the work of Frank Miller or The Walking Dead, and the ways in which they work without color.

Source material influences reader expectation based on what they might have first encountered in comics, Haspiel feels, which encapsulates the tropes that then have to be broken."

"Circling back to the definition of genre, Haspiel explained that he’s recently been writing plays, and that he loves “story” and “mixing up stuff”. He loves “bad B movies” and cheesy movies because “there’s something in there was well”. He picks and chooses and “mashes up” the things he loves in his work, so he finds genre hard to define. If he was asked to do a “straightforward genre”, he probably couldn’t do it. Asked once to pitch “Hulk noir” to Marvel, with him as a military character, he couldn’t do it. But asked to do a “strange tales” story, he was fine. He found the weirdest character he could, one called “Wood God” and added many other Marvel characters to the story.

Alverson wondered if “genre is what other people write”, meaning we apply it to others rather than our own products. Haspiel mentioned the film The Arrival, a science-fiction movie that broke genre rules and his heart. There are expectations, but he loves it when something “turns” on the audience in that respect."

"Haspiel has been reading a lot of biographies and auto-bios of comedians and actors, who are “fascinating people” with “really cool anecdotes”. Maybe that helps with “character building”. Some television is as quality as literature, he commented, including a show called “Banshee” he’s been watching.

Asked if there was a genre they hate or wouldn’t write, Haspiel said he can’t wrap his head around “fantasy” like sandals, swords, and dragons. He loves Game of Thrones though. He played D&D as a kid, but he has an “allergic reaction” to the idea of doing it. Despite those elements in his own work already."

"New Brooklyn was born out of a frustration of trying to make ends meet as an artist in NYC as the price of living rose exponentially and freelancer rates remained the same. My then-studio was losing its space and my studio mates were being displaced. Some went back into the closets and bathrooms of their homes, while others moved to more affordable states. My current studio consists of refugees from the fall-out, but some of us continue to shave corners; to keep our pledge to create personal art that reflects and reacts to the world. Alas, autonomy is a privilege you need to earn.

Besides New Brooklyn setting the stage for an experimental economy where you can barter art for food and services, it’s also the backdrop for The Red Hook to negotiate right from wrong. New Brooklyn honors its broken bridges by building new bridges within its diverse neighborhoods, brokering authenticity with gentrification. Where heroes are revealed to be the most unlikely candidates."

"The Red Hook is just trying to make ends meet. He isn’t evil but he doesn’t dream big either. Clearly a cat I can relate to. However, his girlfriend, The Possum, has higher aspirations and is looking to retire before she plucks her first gray hair. They enjoy a healthy friction, where their biggest concern is whether to make love in their costumes or not. The Red Hook tends to over-analyze. He’s a worry wart brought on from years of insecurity; he hesitates. The Possum is more curious and confident, bordering on dangerous; willing to take risks. And their different personalities speaks to where they each end up in the finale of volume one."

"The Green Point is a demi-god. He’s kinda like New Brooklyn’s Thor but with a mystical sword instead of a hammer. And, when his immortality is compromised, he passes his burden of altruism onto, or to be more precise, into the nearest person who happens to be Red Hook’s resident super-thief. This complicates matters as The Green Point’s imbalanced girlfriend, The Invisible Light, expresses megalomania, endangering earth’s infrastructure.

Without giving too much away, The Green Point should have been the protagonist of this tale but his life was cut short. And now, the guy who sneaks around stealing valuable art and household items to pay for his waterfront warehouse, is left holding the bag to help save the world from cracking in half. Were I to ever produce a pre-New Brooklyn story about The Green Point and The Invisible Light, I’d call it, “The Pure and The Damned.”"

"Because comics are formally a sequential series of words and pictures that culminates into a whole story, a single piece of narrative, I don’t really have favorite pages, or panels, or dialogue. Sure, there are a bunch of things that stick out, but they’re earned by what occurs before and after. Because all of my published comics are what I dub “deadline art,” drawings attached to a clock, I can’t allow myself the indulgence of playing favorites. And given the luxury of time, I’m not sure I want to find out what my art really looks like."

"I was never ready for prime time and my work frankly was never up to snuff for the Big Two. The Red Hook encouraged me to not care about how my art looked and how my writing read. I went with my heart to produce something honest and possibly embarrassing yet wholly pleasurable despite the market."

Heidi MacDonald interviewed me about The Red Hook via Book Expo America 2018 for the Publishers Weekly podcast, More To Come, episode 318.

You can listen to it here: https://www.publishersweekly.com/pw/podcasts/index.html?channel=2&podcast=870
Collapse