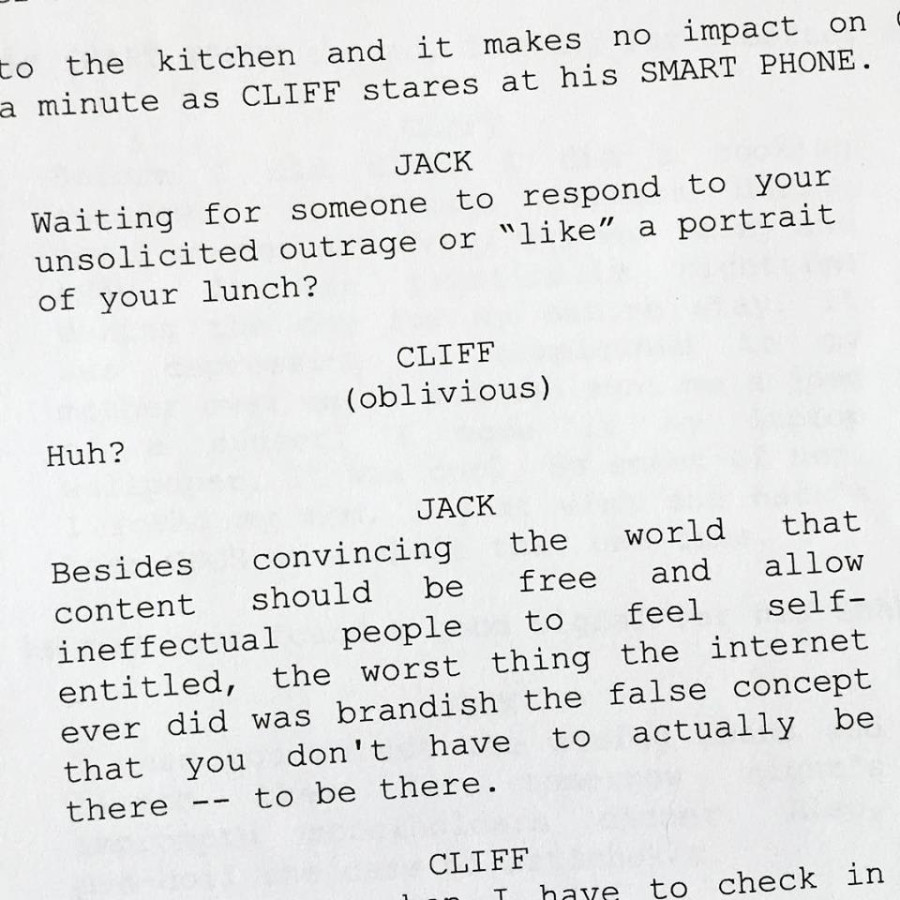 Hannah Means-Shannon: For all its earthiness, Harakiri Kane is still a play with a lot of surrealism. What do you think non-realistic elements open up for you as a performer or for audience members?

Dean Haspiel: Harakiri Kane is bare bones in its surrealism where metaphor and levity helps anchor the reality of the drama. Absurdity and humor allow a serious or less-open mind to absorb and confront things in a more generous way. Sometimes a punchline can manifest clarity.

I don’t believe we can ever truly know anyone by mapping their trends. It’s lazy. Individuals are a bouillabaisse of emotional curve-balls. Inter-dimensional, like a Dr. Strange astral plane drawn by Steve Ditko. Put six people in a locked room with a loaded handgun and we’ll find out what’s what with who’s who. Which is why I prefer to indulge what makes the heart beat over what makes the mind tick. I write with my gut.

HMS: Do you have backstory and crossover with other art forms in your life beyond the theater? Can you tell there are influences from various art forms in Harakiri Kane?

Dean Haspiel: My mother was deputy director at The NY State Council of the Arts, and my father wrote about Hollywood blonde bombshells for magazines, and even wrote a few books about Marilyn Monroe, who he knew the last eight years of her life. My godmother was Shelley Winters and she introduced my parents to each other. I grew up around actors and theater, but I never thought I’d be writing plays one day. My eye was on making comic books. Possibly movies.

Harakiri Kane was inspired by true life events coupled with things I took away from Wim Wenders’ Wings of Desire, Warren Beatty’s Heaven Can Wait, and Tobe Hooper’s The Texas Chainsaw Massacre. Writing theater is a departure from writing comics, but both mediums encourage me to express human connections in different ways. With comix I tend to draw a lot of kinetic action, where punching is not far from kissing. In theater, I shape conflict between living human beings staggering around a square space reckoning with their truths.

HMS: What elements in the play did you connect with most that helped you find a way into it and the ability to interpret it for an audience?

Dean Haspiel: Because the premise of Harakiri Kane is far out–agents of death shepherding the dying and the dead–I had to focus on what connects us as strangers. What makes each of us vulnerable, while seeking some understanding of why we’re here. What we expect from life. I believe a lot of people go to sleep and wake up thinking about a lot of unanswered questions.

I’m a fan of Edward Albee, Tennessee Williams, Harold Pinter, Arthur Miller, David Mamet, Tracy Letts, Ian W. Hill, etc. But, it wasn’t until I saw Eugene O’Neill’s Long Day’s Journey Into Night in 2003 at the Plymouth Theater in NYC, featuring the late Philip Seymour Hoffman, that I first understood the menace of theater. I remember sitting in the audience wondering “Why is Hoffman in the play?” He was known for a certain gravitas in his movies but, in this bleak play he seemed to barely act.

It wasn’t until the 2nd or 3rd act that Hoffman exploded the stage like a time bomb. It was emotional, yet devastating, and something clicked inside my head. Hoffman, like his character, had been waiting to say what he needed to say but everything in that play, up to that point, was against him. The world was an obstacle and he had to tear it all down. I remember thinking about Hoffman’s performance for weeks after. How had he exploited the limitations of a stage, the lack of close-ups and angles, bereft of music to manipulate your emotions? He just stood there with his body and voice and shivered his emotions into you. Into me. It was brutal. Years later, Philip Seymour Hoffman would actually run into me, knocking me over, but that’s another story. I fell in love with the power of theater and realized it could never truly be mirrored in any other medium.

In Harakiri Kane, a character named Jack talks about his disgruntlement with the way we currently consume culture. He states, “Besides convincing the world that content should be free and allow ineffectual people to feel self-entitled, the worst thing the Internet ever did was brandish the false concept that you don’t have to actually be there–to be there.” Later on, Jack ultimately concludes that “Surveillance has replaced experience.”

HMS: It looks like this whole cycle of plays might end up with a New York flavor, as much dramatic and fictional as based on reality. Do you think evoking known and shared locations makes it easier or more effective to reach an audience?

Dean Haspiel: My first play, Switch To Kill, was a psychological crime noir. My second play, Harakiri Kane, was an existential gore noir. My next play, The Last Bar at the End of the World, is more autobiographical with a twist of metaphysical, and is about troubled people reckoning with lost love and the sages in their lives. Some of the people they meet trade in the same universe that I’ve been writing all three plays in. Stylistically, all of my stories take place in a German expressionistic version of a spaghetti western NYC, where Giallo and the Grand Guignol intersect.