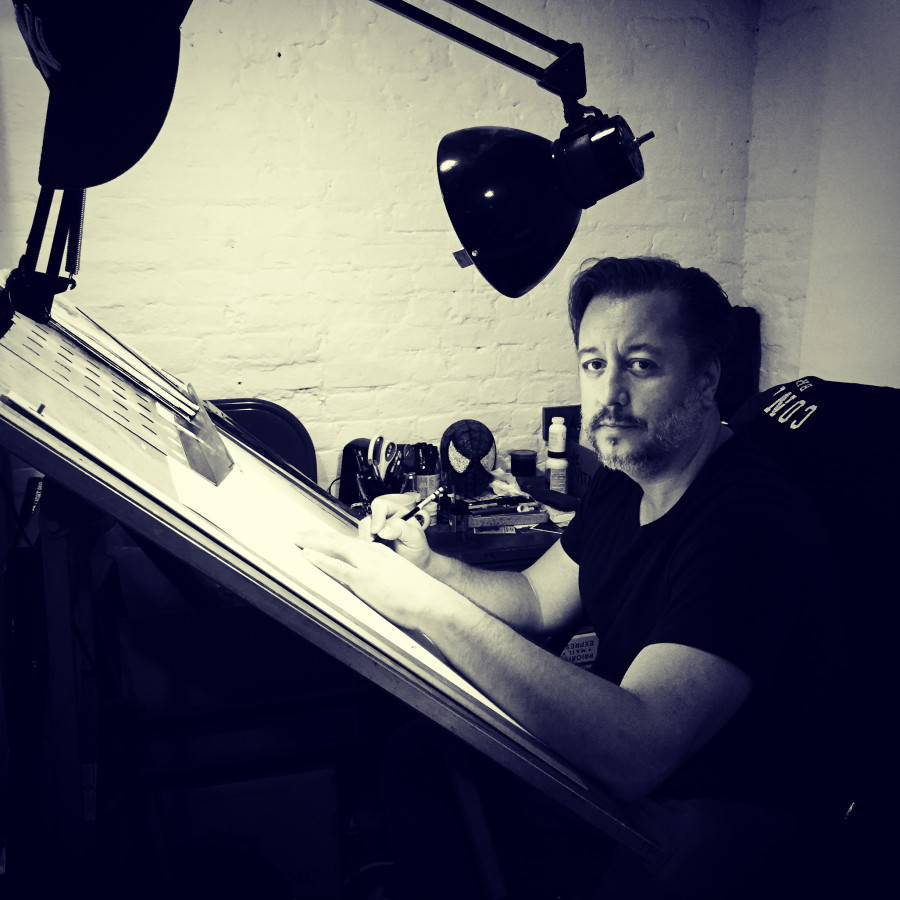 Mimi O'Connor interviewed me for Brick Underground. The article is titled "Comic book artist Dean Haspiel talks gentrification in Gowanus, his rural art colony fantasy, and more" and here are some excerpts:

Where are you from? Can you talk about growing up there and how the neighborhood has changed?

I was born in New York Hospital and grew up at 230 West 79th St. and Broadway, where I got to enjoy the culinary delights of H&H Bagels, Zabar's, La Caridad, Big Nick's, and Flor De Mayo. There used to more diners and newsstands where I'd pick up my weekly comic books and chocolate malted milk shakes.

At age 15, I got my first part-time job working as a clerk selling candy and bus tickets to The Sands casino in Atlantic City while working the lotto machine at a cigar store around the corner from my home. It was owned by a sweet Jewish man named Saul Slotnick. I met my first cartoonist there, a Japanese-American letterer named Ben Oda. I noticed he carried an art portfolio and I asked him what was in there, and he pulled out original art for the comic strip DONDI and other work. I knew then and there that I had to become a cartoonist.

My parents split up when I was 15 and my mother moved to Brooklyn, then the Catskills, and now she's in Florida. My father finally had to give up our home and now he lives in East Hampton. But, I sometimes visit the Upper West Side to go to the Museum of Natural History, eat at La Caridad, and ogle the Hudson River via the Boat Basin. The few occasions I go up there, it's interesting to recognize some familiar faces who never left and aged gracefully while wondering who can afford to live in that neighborhood now.

How many apartments have you lived in in New York?

I've lived in only four apartments in NYC. The Upper West Side with my family at 79th and Broadway where I went to PS 87, IS 44, and LaGuardia High School of Music & Art and Performing Arts. After that, I went to SUNY Purchase to study art and film for a few years, and then lived in SoHo on Thompson Street between Spring and Broome with a couple of friends.

It was originally the apartment of comic book writer/editor Denny O'Neil, famous for his runs on Batman, Green Lantern/Green Arrow, Iron Man, and The Question. While trying to make it as a freelance artist in Soho I made money as a waiter at Nick & Eddie restaurant, and the co-creator/chef, Eric Bromberg opened the first of many Blue Ribbon restaurants with his brother, Bruce. Later, I moved in with my then-girlfriend, who lived in a one-room apartment in Alphabet City on 14th Street between avenues B and C. When she broke up with me, I moved to Carroll Street in Carroll Gardens, Brooklyn, where I've been living for over 20 years.

I'd only visited Brooklyn a handful of times when some of my college pals got a place on Bergen Street with a rooftop where they had parties. Moving to Brooklyn felt like moving to the country. Luckily, another college pal knew of an apartment opening up in Carroll Gardens, and I snagged that with my singer-songwriter pal. When he split, I had some more roommates, including a couple of cartoonists, Nick Bertozzi, and then Michel Fiffe, before living solo a few years. My girlfriend, a fine artist/teacher, lives with me now.

How is living and working in Brooklyn different from Manhattan?

Brooklyn feels more neighborly than Manhattan, but with a spaghetti Western vibe. Despite gentrification, some areas are less-charted than others where lines are drawn. When I first moved to Carroll Gardens, it was much more Italian. I felt like an outsider for a while until I somehow passed some kind of quiet initiation that allowed me to get the occasional nod.

Manhattan is much more bustling. You can literally walk down Broadway naked with a knife in your back and no one will notice. In Brooklyn, neighbors keep an eye out for each other. But, sometimes you've got to warn the kids across the street to quit throwing water balloons at you because you know where they live. See, you should not mess with your neighbors across the street. You've got to go around the corner and mess with the other neighbors on another block, don'tcha know? In Brooklyn it feels like a maze of mini-borders, kinda like the movie The Warriors, but instead of gangs it's tribes.

How has the city changed in terms of where artists live and work? Can you talk about different neighborhoods/scenes over the years?

Artists spaces have shrunk and become more expensive. And, will probably continue to do so, sparking even more of an artists exodus to upstate New York, the Catskills, New Jersey, and Philadelphia. Some folks are just cold splitting for Hollywood baby, and I don't blame them. Good luck in Los Feliz, y'all.

I get it. What I used to be able to afford a year ago costs almost double, for less space in Brooklyn. When we lost our space at 112 Second Ave., I had to move half my studio home, which is no longer a home. It's a disheveled storage unit now. A hoarder's wet dream. I can't even think about what I need to do. What I need to donate or toss in order to carve out a small space to eat a meal and watch a late night movie? Entertain friends? A thing of the past. You have to drive to the Catskills to host a group barbecue.

In 2006, I was excited to co-found a physical studio with five other artists when Gowanus was less desirable, [when it was] a place you traversed to get from Carroll Gardens to Park Slope and Prospect Park. But, like what happened to Soho in Manhattan and across the river in Dumbo, to Williamsburg, Gowanus and, next Bushwick, where artists gather in funky industrial wastelands, make it cool with the energy of their unbridled diversity, creating a geographical synergy between art and commerce, we eventually got the proverbial boot because the kind of currency we truck in isn't necessarily cash money dollar bills. And, not to suggest we're a bunch of scabs who can't pay the bills—we pay our bills—but when will the rent increases plateau? How much more can you charge for an empty box?

Traditionally, artists forfeit a lot of "normal" life and amenities in order to create work that skates the peripheries of experimentation with social commentary and commercial latitude. Nobody put a gun to our heads, making us do what we do but we often sacrifice 401k plans, health insurance, and the concept of a second home (much less a first home) for secondhand couches and converted factories so we can incubate, express and, hopefully, communicate our ideas beyond friends and family.

I fantasize about owning a large retreat in the mountains where other artists create and socialize but I'm tethered to the streets of NYC and I need to learn to let that go so I can realize a space that makes sense for my economy and mental health. I'm too burnt out to let anxiety be my friend anymore.

New York clearly has a big influence on your work. What about it inspires you?

NYC is in my blood. It's known to be the greatest city on earth. Talented geniuses and savants are drawn to NYC like magnets. I will never know what it's like to visit NYC for the first time because I am NYC and NYC is me. If I'm going to write and draw people, places and things, it's inherently going to be about NYC. I thought I was escaping NYC when I split Manhattan only to discover that Brooklyn, like quicksand, only took a stronger hold of me. Despite my public grumblings about NYC, how expensive it's become, how real estate developers don't care about authenticity, I will always be a diehard New Yorker.

Is there a part, area, or aspect of New York that is of particular interest to you right now?

I've always been fond of Red Hook, specifically the Ice House where you can still grab a beer and a shot of whiskey for six bucks while waxing stories about The Butthole Surfers with Gibby Haynes, or Sunny's Bar (RIP Sunny) where the Saturday night bluegrass music provides soul-mollifying spirituality. I cherish the art scene over there: Kentler International Drawing Space, and Pioneer Works.

I love the waterfront. A few years ago I discovered the Mermaid Spa, a Russian bathhouse in Sea Gate, and I was happy to rediscover Rubulad, an art/music party space planted deep in Brooklyn for those in the know. Smith Street in Carroll Gardens still has a lot to recommend itself, as does, I'm sure Williamsburg and any number of the hip 'hoods that are happening. But I just turned 50 in late May and I'm starting to feel less inclined to keep up with the underwritten. Photos of Dean Haspiel in his studio by Jason Goungor. 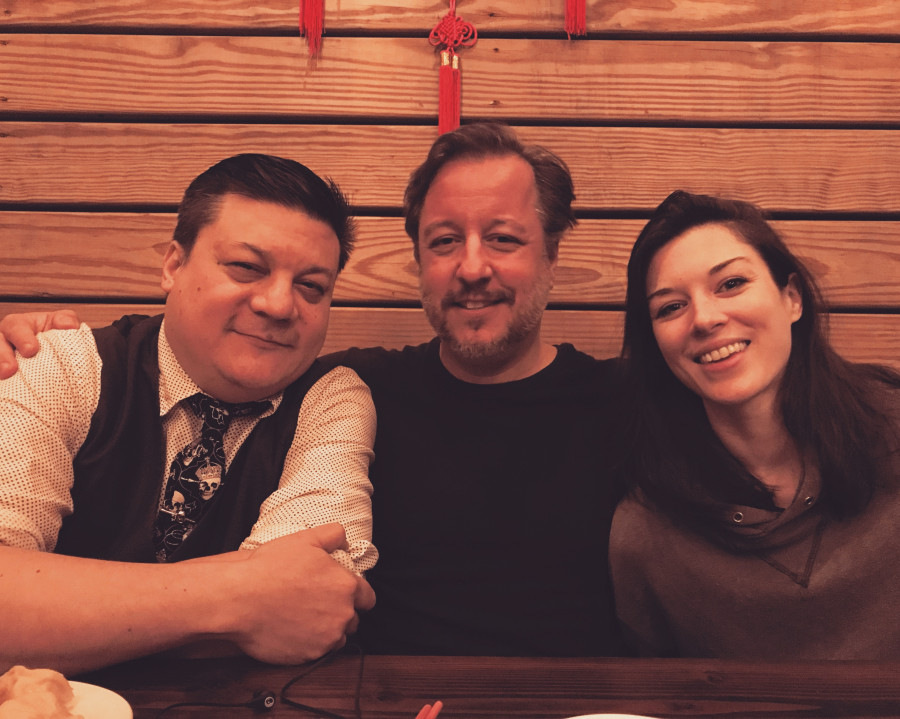 Jimmy Aquino came to see my new play, HARAKIRI KANE, and, afterwards, interviewed me and Stoya at M Noodle Restaurant in Williamsburg, BK/NY, for his podcast, Comics News Insider 816.