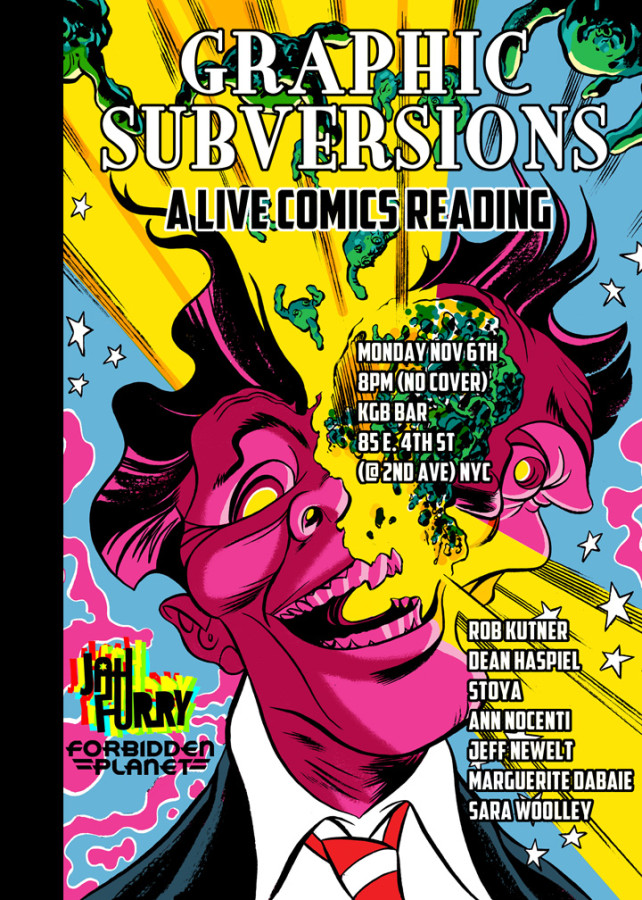 Thanks, Adam McGovern, for the great review of my play, HARAKIRI KANE.

"It’s not how you live your life, it’s how you outlive it, or live it down. Comic writer/artist Dean Haspiel (full disclosure, a collaborator and crony of mine) has lived several artistic existences, without once yet falling on his face in-between. In his second incarnation as a playwright, Harakiri Kane (the first was Switch to Kill, in 2014), Haspiel contemplates lives lived poorly, or well enough alone. It’s parenthetically subtitled Die! Die, Again!, but the Russ Meyer hysteria and hardboiled melodrama promised by that title (and delivered, epicureanly, by Haspiel’s previous play) is a lifetime ago. This is pop-philosophy with no pretension yet unimpeachable insight; a dive-bar Wings of Desire.

The above and below are both accounted for, however. Though most of Harakiri Kane takes place in the shadows (bars, boxing rings, industrial wastelands, funeral homes), it begins in the sky. We’re in the Himalayas, where an explorer named Orlagh is climbing a mountain to enact an ever upward aspiration after receiving a diagnosis of imminent death. She’s on a tower that will fall short of heaven, talking to lost and burdensome lovers and then to a long-frozen corpse, forced to stage entire conversations on her own (a performance of desolate tenderness by the always heartbreaking or electrifying Alyssa Simon).

Having only yourself to remember your story to is tragic, but more so if you don’t even know how it goes. Harry “Harakiri” Kane, an ex-boxer who starts shambling through the narrative when we cut from mountaintop to alleyway, takes a while to even recover his own name. He’s the kind of tabula rasa through which fate can get itself written (in the tradition of mysterious or amnesiac champions from The Man With No Name to Demon With a Glass Hand). We come to learn that he is one of many forgotten men and women, walking a path between existence and oblivion and roaming the land of the living, visiting strangers near to the moment of their death. Haspiel’s modern metropolis is still populated by archetypes from as far back as penny dreadfuls and as farther back as mythic antiquity, like the death-worshipping, human-butchering chef Jack (played in haute dudgeon by director Ian W. Hill), and the corps of beat-walking Valkyries to which Harry now belongs.

The world feels like all of us are stepping over bodies anymore, and escape from either the danger they face or the duty it calls upon is inconceivable. For Harry, it’s also not possible — trying to release himself through suicide never works. Others of his kind don’t try at all, either renouncing the physical for philosophical pursuit (Nicodemus, a suave and subtly frightened portrayal by Rolls Andre), or making a pastime of testing themselves for vestiges of human feeling (the wistful, fearless storyteller Sharon, a poignant and powerful stage debut from Jessica Stoya).

As played by Alex Emanuel, Harry is in the grand tradition of poetic palookas from Wallace Beery onward, and his stubbled, square-jawed countenance and scuffed, haggard grandeur make him a Haspiel cartoon come to life, in a brutally sensitive performance that’s staggering in more than one sense. His instinct is to be an angel of mercy, befriending doomed losers like the barfly and desperate bankrobber Joe (played in myriad shades of mournful, mischievous resignation by Linus Gelber), but Harry’s curse is to be the one left standing.

“We only get one chance to die, and I screwed it up somehow,” Harry says at one point, and his crime seems to be trying to reject his destined narrative — he’s the soldier who disobeys orders, the epic warrior who has declined his role.

The script Haspiel has written for him suggests there might be a virtue he holds on to and a way to claim its reward, but nothing will be gained easily. Hill and collaborator Berit Johnson keep the guignol gore startling yet sparing, and Hill’s staging and pacing are stark without austerity, brooding but never overbearing; having created painterly noir before, with his comicbook scenarist he achieves an eloquent, tensely alive sketch.

Sharon watches mortals through entire lifetimes and writes stories of her own lives unlived. Like Orlagh at the play’s beginning, she alone is left to tell her tale, a holy text or mythos to fill the blank page of her past. She is the last being we see, and the end of the story is expressed beyond words…a shout in the dark, echoing the pain of birth and the feeling that connects us to the earth. Harakiri Kane sacrifices everything for its artistry, and wipes the canvas clean for any new life story to begin."