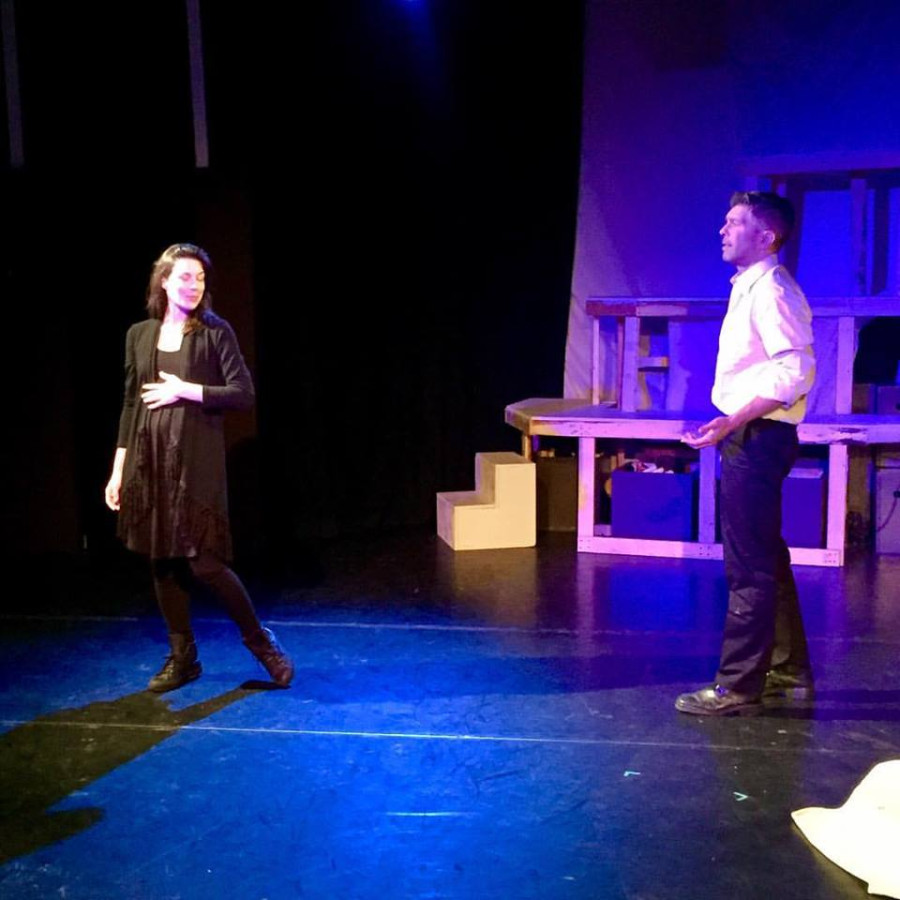 Edie Nugent conducted an in-depth interview with me and Stoya at The Comics Beat about my new play, HARAKIRI KANE.

You can read the entire article/interview here: http://www.comicsbeat.com/interview-dean-haspiel-and-stoya-bring-sensuality-to-death-in-harakiri-lane/

Edie Nugent: You’d done some play-writing in college, and now you’re mounting a full production of Harakiri Kane after work-shopping it for a bit. What draws you to express yourself in that medium, in addition to your comic work?

Dean Haspiel: My godmother was Oscar award-winning actress, Shelley Winters, who once directed my late brother Michael in a play at Lee Strasberg‘s Actors Studio where I witnessed the process of theater. I was barely a teenager but got to get a sneak-peek behind the curtain. As a child, I hung around talented actors the likes of Farley Granger, Robert De Niro, Al Pacino, Sally Kirkland, Michael J. Pollard, Susan Tyrrell, Steve Railsback, and Fisher Stevens. But, I was too young and didn’t have the proper context to fully appreciate the people my parents knew. Thanks to my mother working at The New York State Council of the Arts, and my father’s personal connection to Marilyn Monroe and writing about old Hollywood, I was prone to entertainment. My first love was comic books but I was fascinated by off-Broadway productions for its minimalism, experimentation, and low-budget innovations.

In college, at SUNY Purchase in the late-1980’s, I studied art and film and befriended a bunch of young actors who I worked with; some of whom went on to become well-renowned, and we stayed in touch. In the early-90s, I took a crack at writing screenplays that never left the bottom of my desk drawer. With those stories collecting dust, I focused on making a career in comix, my first passion, while dipping occasional toes into movies and television. I was either too shy or lacked the confidence to pursue moving pictures but I’ve cherished all narrative mediums as far back as I can remember. Storytelling is in my soul. And, with a couple of thousand comic book pages under my belt and latter-day encouragement from playwright Crystal Skillman, and actor/director Philip Cruise, I’ve come to resurrect and transition some of my old works into theater with the custodianship of sir Ian W. Hill, a masterful director/producer and actor at The Brick Theater in Brooklyn, NY.

Edie Nugent: A good bit of your work draws on the neo-noir pastiche, what fascinates you about telling stories in that style and mood?

Dean Haspiel: The tenets of neo-noir share core similarities with the Silver Age comic books I enjoy; featuring morally complicated characters steeped in high stakes situations coupled with heart-shattering romance where promises are broken and time is a luxury. In my personal works: Billy Dogma, The Red Hook, Beef With Tomato, and even with the franchise stuff I’ve been the shepherd of, like The Fox for Archie Comics, I tend to abstract conflict and excavate the emotional truths so I can express something meaningful yet entertaining. At least, that’s my goal. Harakiri Kane is next-level pulp, an existential gore noir.

Edie Nugent: The earlier play work you’ve done was a staging of Switch to Kill in 2014. You’re working with the same producer, who also acted in that show and directs and acts in Harakiri Kane. What did you both learn through that process, which I think was your first full production, that carried over?

Dean Haspiel: With the exception of writing the script, I had no influence on the production of Switch to Kill. I had a couple of initial meetings with Ian W. Hill who read through some of the dialogue with me and I immediately felt confident in his understanding of what I was going for. See, I’m a fan of stylized dialogue, the likes of Harold Pinter, David Mamet, and Edward Albee. Tonally, Switch to Kill was like a cross between Who’s Afraid of Virginia Woolf? by way of Abbott and Costello with guns. Alas, it only ran four shows as part of a bigger festival and I hope we get to revive and expand that play someday but to say I was bit by the theater bug is an understatement. My current play, Harakiri Kane, is more akin to a twisted Wim Wenders by way of the Grand Guignol.

Edie Nugent: Harakiri Kane is a story of angels and demons, as well as serial killers. What inspired you to write this particular story?

Dean Haspiel: There was a brief period of time when I was living in Soho, NY where I felt like I was a magnet for death. It seemed like every time I left my apartment, a stranger died. I remember hearing the horrific sounds of metal smashing into metal as I stepped onto the sidewalk of Thompson street and a sole hubcap came slowly rolling towards me and circled my body, settling at my feet. I traced the hubcap’s journey back to its source a block away only to discover a car wrapped around a pole. People dead. Blood and glass everywhere. Policemen had just arrived. Everyone was shaking.

Naturally, I was shocked by the tragic scene but I couldn’t stop thinking about that hubcap and how it had to turn a street corner and roll towards me as if it was anointing me for some kind of mission. Another ferryman to help others cross the River Styx? Stuff like this started to occur on a regular basis. A man jumping off a roof. A woman getting hit by a car. An overdosed derelict. Was I a specter of death? So, I locked myself inside my apartment in hopes it would decrease the deceased and started writing about it–which helped me think about the dying and the dead in ways I’d never considered before. I started with a character named Harry Kane, a boxer who died a year ago and doesn’t know it. Thus, began Harakiri Kane.

Edie Nugent: You’re working with your Heavy Metal collaborator Stoya. What did she bring to her role in Harakiri Kane that wasn’t in your original workshops of the material?

Dean Haspiel: Stoya was my only choice to play Sharon in Harakiri Kane and it was immediately confirmed when she first read the character. I took notes, further developing the resurrected script. Stoya is a renaissance woman, a force of nature, who has a gift to hold hostage space and time in compelling ways. I’m honored to have her break her NYC theater cherry with my play. In fact, the entire cast and staff is an assembly of truly brilliant talent and I’m extremely lucky to have them all bring my words to life.

Stoya also appreciated Haspiel’s work ethic, citing it as one of the reasons she wanted to work with him on the show. She called Haspiel: “serious and efficient with his work,” explaining these are qualities she especially appreciates. Haspiel also made sure to be aware of Stoya’s comfort level in the process of staging the show. “He kind of eased me into it,” she said, “first it was the reading in someone’s living room just to hear the script, then the public reading and the actual play.”

When I asked what was it about the story of Harakiri Kane in particular that she found compelling, Stoya simply said: “It’s hard to choose between the humor and the point it makes about the will to live.”
Collapse