Quite proud of this effort. We've been wanting to eradicate all guns in the New Brooklyn Universe for a long while now and today is the day it became official.

There are many ways to maim and kill and achieve the soul-shattering horror of violence, but we need to reduce those options and it begins with banishing guns to ashes, as sparked by the power of The Purple Heart's cosmic rap. Chapter 23 is a feather in our creative caps.

Sure, it's fantasy and taking away guns steps on certain rights but the New Brooklyn Universe explores meaningful alternatives, like making art to barter for food and services, and other communal solutions by contrasting and questioning old ways with new ideas.

Please check out what Vito Delsante, Ricardo Venancio, me, and Tom Akel have been doing at LINE WEBTOON -- for free!

The fine folks at The Barclay's Center in Brooklyn, NY contacted me a couple of months ago to design and illustrate a comix gift for pop star, The Weeknd, who performed at their venue June 6th & 7th, 2017. I was surprised yet impressed to learn that The Barclay's Center had an office dedicated to furnishing custom-made gifts for some of their headlining acts and was flattered that they would reach out to me. My contacts, Courtney and Alanna, told me that The Weeknd was a comic book fan and they wanted me to come up with something that reflected his new "Starboy" album and persona.

So, I came up with the loose idea of an orphaned galaxy roaming the nether-sphere sans purpose and discovering our planets and putting them on as rings, kinda like a mash-up of Marvel's Eternity and the Infinity Gems, and giving our solar system a place to exist among other cosmic life; a Milky Way. Everyone liked my idea and we devised a mute comic poster that, upon print, would be a 16-inch tall by 45-inch wide poster.

Alas, The Weeknd was too busy rocking out and the fine folks at Barclay's Center never got to personally hand the gift off to him but they said they mailed it to him and I hope he got a kick out of what I made.

We saw The Weeknd perform on June 7th, and it was an energizing event. His loyal fans were half the fun of the show. I also discovered another band, an opening act called Rae Sremmurd, which my girlfriend Jen and I quite enjoyed.

Here is an additional aspect of the Starboy gift, a "cover only" version. 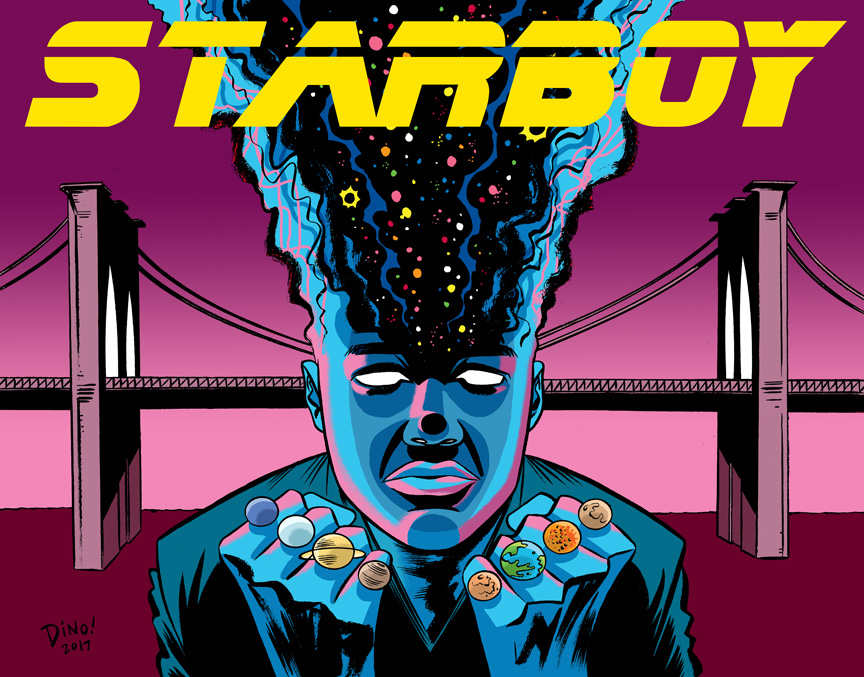