Experience the harrowing origin of The Coney in The Red Hook Chapter 18: http://www.webtoons.com/en/super-hero/the-red-hook/chapter-18/viewer?title_no=643&episode_no=19 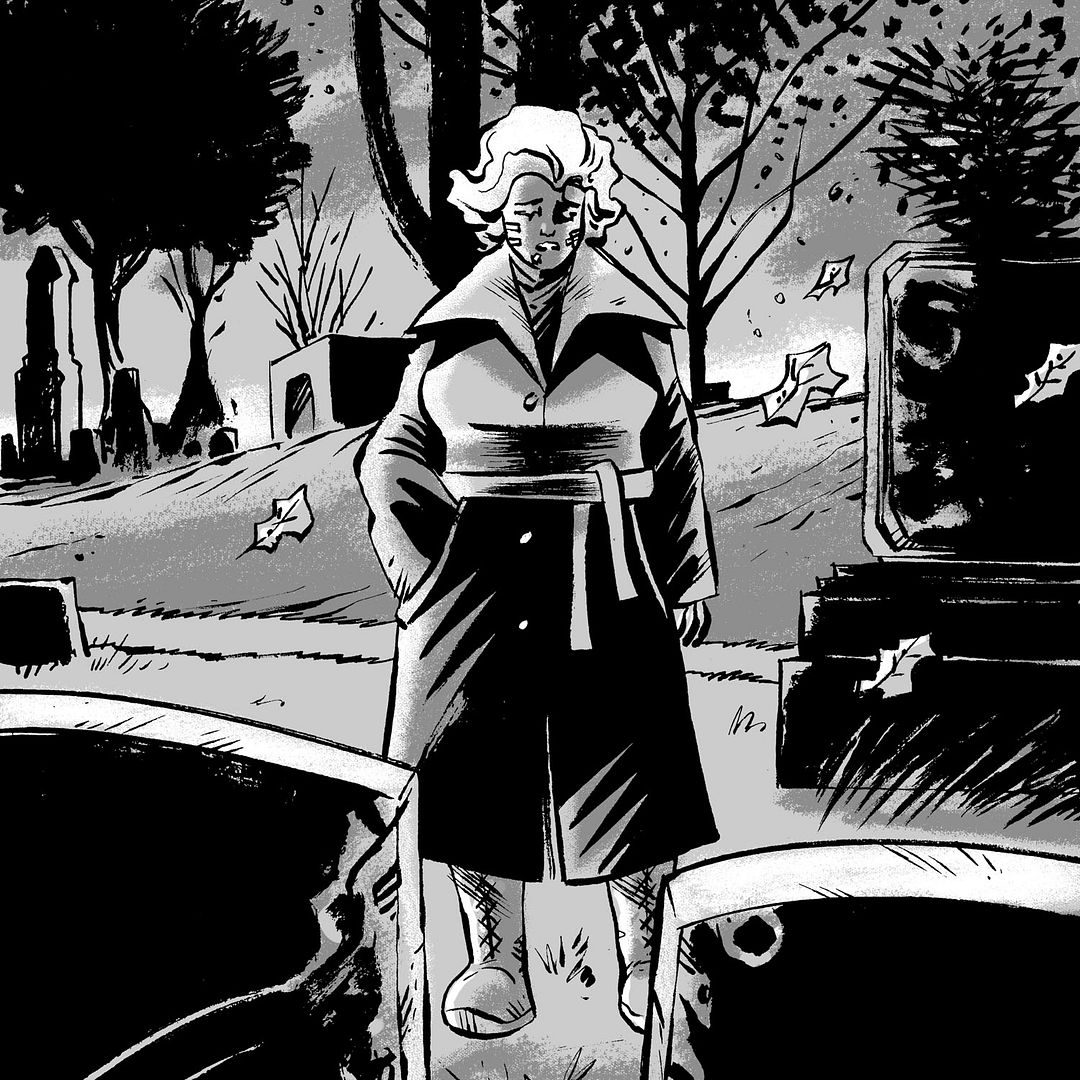 Read THE RED HOOK from the start for free: http://www.webtoons.com/en/super-hero/the-red-hook/list?title_no=643

(Dean Haspiel at the Rokeby Estate)

Christopher Calloway interviewed me about The Red Hook and other comix stuff for Word of the Nerd.

Brooklyn having a broken heart and becoming an island unto itself is an analogy for it undergoing a cultural change. Artists are losing their studios as the neighborhood becomes more “gentrified”. How are you and your fellow artists living in the area coping with the change?

Our family is breaking up. As independent freelancers, there is nothing we can do. What was once $25 per square foot a few years ago has become $45 per square foot, if we’re lucky. Most of us are moving back into our apartments. Communities and studios are dissolving. Anxieties are high and spirits are low. There’s chatter of some freelancers making an exodus to the mountains or to affordable states but nothing organized.

I’m emotionally tethered by the fact that I’m a native New Yorker and NYC is the only place I’ve ever lived in. But, as evidenced by the abnormal rent hikes, real estate and land developers don’t care about grass-roots culture. NYC is no longer interested in underwriting the avant-garde with affordable spaces.

My friend, Reverend Jen, an elf-ear wearing, NYC perennial who has written several books, hosted a legendary Anti-Slam for over two-decades, including the x-rated Mr. Lower East Side Pageant, was recently kicked out of her lower-east side apartment where the worlds greatest Troll Museum existed. Now, she’s crashing couches and trying to make ends meet. I’m afraid we’re going to lose her. We can’t lose her! When some people think about NYC they think of the Empire State Building, Times Square, and Blade Runner-esque billboards. When I think about NYC, I think about the outliers who fuel the heart and energize the soul of NYC.

The other day I was having lunch with my friend/sometimes collaborator/writer/television producer, Jonathan Ames, and we were talking about art in NYC and he agreed it was compromised more than ever before. The wild stuff he performed and curated years ago at The Fez and Mo Pitkins, the stuff of legend, would be tough to engender today because who goes anywhere anymore when everyone is glued to their smart phone? It’s hard to compete with an audience that can’t extricate themselves from the internet for a couple of hours to experience something live and direct. Our surveillance society has created attention-deficit disorder zombies. The “scene” got taken hostage by the screen. My girlfriend, Jen Ferguson, is a fine artist painter and private teacher but she, too, is losing her work space and is wondering if we need to move to Newburgh or New Jersey, and apply to more artist residencies since we can’t seem to sustain our own, home-grown artist colonies.

For the first time in my life I’m eyeballing California. But, I don’t know anything about packing up and moving away. Philadelphia is promising, Pennsylvania is pretty, and New Orleans may be the coolest place on earth but I have a mental block in taking that leap of faith. Not to say that NYC is a cultural graveyard and there will never be cool happenings like Cynthia von Buhler’s immersive theater, or Nat Towson’s Downtown Variety Hour at UCB Theatre, and venues like Cake Shop, Gemini & Scorpio Loft, Littlefield’s, The Brick Theater, and Union Hall (where I hosted several salons) which are open to showcasing all kinds of stuff. Modest art galleries like Wendigo’s Art on A, the Gowanus Souvenir Shop, pop ups and energized collectives are also keeping culture stumbling along in NYC, but it’s no longer assumed. Too many of us are handcuffed to our studios working late into the night and can’t attend these happenings. Too many times a month I bear witness to another classic institution shutting down or another artifact crumbling. Just yesterday, I saw the water tower near my studio, the one I drew in The Red Hook, shelled into a skeleton of an iron ladder and base. It’s gone. Vanished like the infamous Kentile Floor sign that sat proudly outside my studio window until it, too, was taken away. If Wo Hop, La Caridid, and The Russian-Turkish Bathhouse disappear, I will take that as NYC’s official invitation for me to leave. NYC no longer recommends itself to ye old guard.

Meanwhile, some landlords are waiting for that big payday while others are perpetuating the arrogant idea that NYC is only expensive and if your art can’t afford the Big Apple, then you’re just a hobbyist and “go get a real job!” I’ve heard through the grapevine that international businessmen are buying and sitting on empty buildings waiting for NYC to appreciate exponentially before they sell to the highest bidder. What used to be scary neighborhoods and underground nooks where you could find a cheap spot to experiment and discover and squeak by on a year of good months and bad months, hardly exists. Which is odd because, growing up with a mother who was deputy director for the NY State Council of the Arts, I counted on the fact that there were a lot of places for artists to make hay. It was that kind of leeway that encouraged me to sacrifice a normal life for the risk of a freelance one, aiming for full autonomy. Now, it feels as if you have to enter a 350-square foot windowless box in East New York, between a garbage dump and daily drug busts, armed with a three-year business plan like a start-up company rather than a group of independent artists willing to share cramped space so as to create cool and exciting ideas necessary to the growth and strength of our culture.

Maybe I should look into the food truck model. Remember those RIF buses (Reading Is Fundamental) from the 1960s & 1970s? Perhaps I could become a wandering cartoonist, drawing my comix and writing my stories on Route 66 while performing and selling my wares though the concession window? The price of gas might be cheaper than an old, quarantined warehouse cement floor steeped in decades of toxic fumes. Or, bite the bullet and hole up in a Catskill barn with my girlfriend. Call it a day.

In Heavy Metal issue #281, you recently collaborated with Stoya on Once Such Partner. Given your work on Billy Dogma and The Red Hook, the former which also appeared in the issue, it seemed like a natural fit for you. What was it like adopting someone else’s essay into sequential art? I would think it would be quite different from working from a comic book script.

Heavy Metal’s co-CEO Jeff Krelitz and I were hanging out at a Wizard World after-party in Minneapolis and we got to talking about me contributing to the magazine which I’d wanted to do since I was a teenager. In fact, Heavy Metal was the first publisher I ever showed my portfolio to in the mid-1980s. Getting my character Billy Dogma published in Heavy Metal is a dream come true. Jeff had the brilliant idea of teaming me up with Stoya, who I was aware of from mutual friends and from reading some of her writing I’d come across on the internet. Stoya is a brilliant young author and entrepreneur. When I met with Stoya we hit it off instantly and discussed an essay she wrote for her blog that she felt might be something I could use as source material for a short comic.

Because the deadline was looming for a San Diego Comicon release, I only had one week that I could steal from my Red Hook production schedule to adapt Stoya’s essay into a sci-fi fantasy. I had to make edits yet visualize something that I felt honored Stoya’s intent. Every word is derived from Stoya’s original text and I made sure she was happy with what I did. It was a fun exercise and I’m thrilled to have collaborated with Stoya. I hope we can work together again.