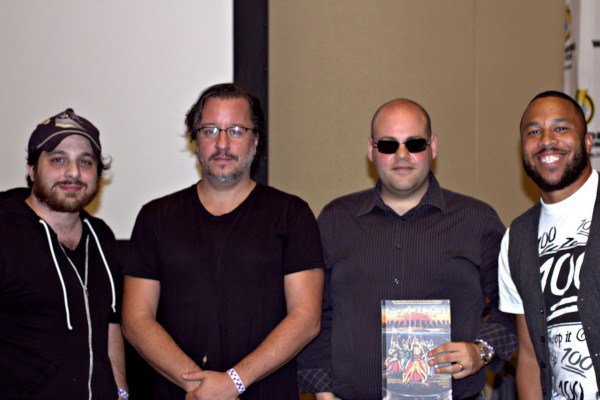 Excerpt:
"Our next panel was How Independent Creators Can Help Solve the Industry’s Diversity Issues. Given the topic, it was predictably held in a smaller room than the zombie panel but it was a thoroughly engaging 45 minutes thanks to the well-spoken panelists: Dean Haspiel (Beef With Tomato), Gavin Smith (All Superheroes Must Die), and Onrie Kompian (Yi Soon Shin) along with moderator Victor Dandridge (The Samaritan) discussed numerous kinds of diversity issues in the industry encompassing race, gender, sexuality and class. The panelists acknowledged real problems in the industry while also talking about the importance of introspection and of owning up to the quality of one’s work instead of automatically playing the race (or gender/class/sexuality) card when things don’t go one’s way and saying something like, “They didn’t hire me because I’m Asian [or fill in the blank].”

I was able to chat briefly afterwards with panelists Onrie Kompian and Dean Haspiel who were both gracious and even sympathetic to my challenge of trying to cover a con as a disabled writer. “I don’t even have Lyme disease and I already feel like I need a nap,” quipped Haspiel."

Part Three of a great conversation I had with Jeff Ayers​ and David Greenberger (of Duplex Planet fame)​ during my 4-week retreat at Yaddo​ and a few visits to The Comic Depot in Saratoga Springs, NY​. Hosted at Fanboys, Inc.

I dated a great Russian gal for 7-months who was quite vocal, highly opinionated, and took charge. A go-getter. I loved that about her. One night, we were in a bar in the lower east side and a drunk woman erratically crashed into a bathroom. Seconds later, a large bully of a man went in after her and locked the door. My gal jumped out of her chair and started banging on the door, screaming "He's raping her! That man is raping a woman in the bathroom!!" I was a deer in headlights. How did my gal know that for sure? I think she was drunk, too. Anyway, I felt that I needed to back her up, protect her, by standing in front of her - waiting for the bully to rip open the bathroom door and confront the accusations. He did. A few seconds later, he ripped open the door and saw me and looked around me to see my gal, sneering at him. Yelling at him. Accusing him of rape. I was prepared to get walloped. But, instead of crushing me, he looked at us and said "My wife is sick and I'm helping her. Mind your own business!" I looked to the side of his bulging bicep and, indeed, his wife was sick, throwing up in the toilet. She looked over at us and gave everyone the nod that he - her husband - "the big bully" - was telling the truth and then hurled a stomach's worth of tequila sunrise. The man, "the monster," closed the bathroom door and my gal felt like a dummy and I was glad to enjoy a still active pulse. Albeit, rapidly throbbing pulse.

Goes to show, we never know all the details of any given public situation and some people jump to conclusions that often says more about them and who they are than the situation presented before them. I'm terrified of a world run by "smart phones" where everything is recorded and disseminated and commented on sans context.

Sure, it's better to look the fool on a situation like the one I describe above BUT, my old gal DID immediately start calling him out as a rapist before he could have possibly done anything and - I guess - that's part of the point. STOP it BEFORE it could happen. Still, it sucks to be considered an automatic rapist because you're big and muscle-bound. I've misjudged people often because of the way they look and it's just not fair. Getting involved can get you killed, too. BUT, you won't see me whipping out my cell phone to record a potentially ugly and dangerous situation and do NOTHING to help resolve it. If I don't have a safe way to involve myself vocally and/or physically, I would use my phone -- AS A PHONE -- and call 911.

I get that we currently live in a George Orwell world (that's begging for Jack Kirby's OMAC), but intelligence (and, I mean true data and understanding of said true data) has been thrown out of the window and been replaced by public shaming for the sake of character assassination. This is why we elect officials and experts to help disseminate potentially caustic information while pundits of all grades continue to wax sensationalism. We all whisper and gossip behind closed doors because we're fascinated by human behavior. We're all a bunch of ill-advised Sherlock Holmes trying to figure out the human condition. But, the second we publish events sans context (I've been guilty of this too with some of those police videos), we let slip the ability to repair and hone positive change and only foster rage and hate. Pointing fingers is a blame game.
Collapse